Eternal Card Game Wiki
Register
Don't have an account?
Sign In
Advertisement
in: Omens of the Past, Common, Power,
and 4 more

.
Depleted unless you have a unit.

Argenport Banner is a power card.

Argenport Banner is part of a 10-card banners cycle of power cards in The Empty Throne, one for each of the 2-faction pairs. Five, including Argenport Banner, were moved to Omens of the Past with the set's release to support Eternal's Draft mode. 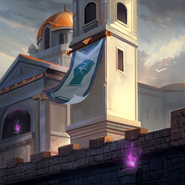