Eternal Card Game Wiki
Register
Don't have an account?
Sign In
Advertisement
in: Flavor, The Dusk Road, Rare,
and 8 more

"Maybe I could use some help. I hear you’re a gunslinger. Why don’t we work as a team?"[1]

Deadly
When Ashara attacks with exactly one other unit, she gets +4

and Quickdraw until end of turn. At the end of the turn, she kills the unit.

This page is about one card for the character Ashara. For other uses, see Ashara (disambiguation).

An Ashara premium avatar was available as part of Eternal Collector’s Bounty, a bundle exclusive to Twitch Prime subscribers from August 2 to September 12, 2018 that promoted Eternal's integration with the Twitch streaming platform.[2] 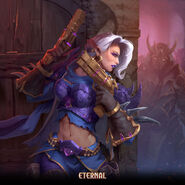