Draw a Time Sigil, Primal Sigil, or Shadow Sigil from your deck.
Transmute

Auralian Cargo is a spell.

Cargo should be used primarily as a way to find a power card from the deck throughout most of the game. Getting a random card is far less important than making sure that every card in a deck can be played. To prevent Cargo from being transmuted, players should account for the possibility of drawing Cargo when sequencing their power in the first few turns.

Auralian Cargo is part of the cargo cycle of 3-faction spell cards that can grab a Sigil early in the game, or transform into contraband later.

The first five, released in Defiance, are: Auralian Cargo 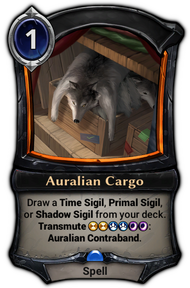 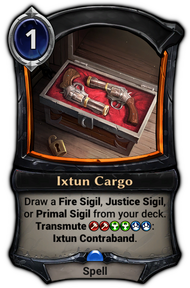 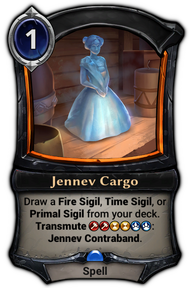 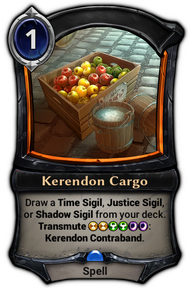 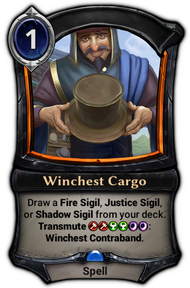 . Cargo for the remaining 3-faction combinations are yet to be created.

The cargo cards were revealed in a Defiance spoiler-season mechanic announcement by DWD.[1]

Retrieved from "https://eternalcardgame.fandom.com/wiki/Auralian_Cargo?oldid=26837"
Community content is available under CC-BY-SA unless otherwise noted.