Summon: Kill an enemy unit without Flying.
The cursed player can't play units with that name while you have Avigraft.
Entomb: They play a 3/3 Valkyrie.

Avigraft is a cursed relic card.

Copies of the named unit have the "locked" effect to mark that they cannot be played.

Avigraft stops token units from being created. For example, an Avigraft on a Grenadin 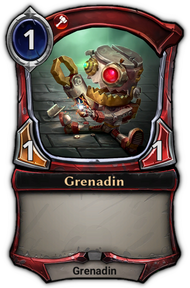 would cause Assembly Line 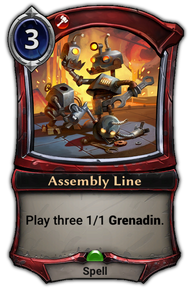 to have no effect if played.[confirmation needed 1] In the same way, "copy" effects like Mirror Image 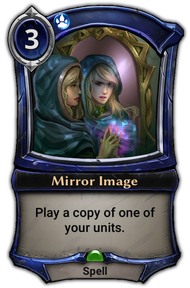 would have no effect if they target another of the named card in play.

Cards that would be played otherwise be played from DestinyDestiny:
Automatically play when drawn, then draw another card. are instead discarded to the void, but the extra card is still drawn from the Destiny effect.[confirmation needed 2]

Your cards can still transform into copies of the unit named with Avigraft.

If you play Omen of Austerity 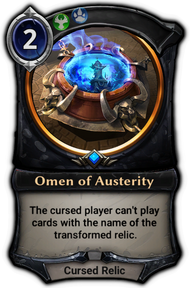 on an Avigraft you're cursed with, you do not recieve a Valkyrie 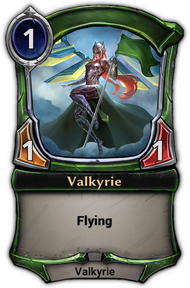 token—the Avigraft is transformed rather than killed, so it's EntombEntomb:
Does something when it is killed. doesn't trigger.

If you plan to stop Avigraft's SummonSummon:
Does something when played. effect by bouncing your unit, be careful to respond in the correct response window. Avigraft is first played as a curse targeting you, then its Summon effect's target is chosen after it enters the play zone. If you bounce a unit in response to Avigraft being played, another unit can still be chosen to be killed by the Summon effect. Wait for the effect's target to be chosen before responding.[1]

Retrieved from "https://eternalcardgame.fandom.com/wiki/Avigraft?oldid=35772"
Community content is available under CC-BY-SA unless otherwise noted.