This page is for the set Awakening. For the card, see Awakening (card).

Awakening is a card set and single-player campaign, released September 1, 2020.[1] It's the 7th campaign-based set for Eternal Card Game, and the 19th set overall.

Awakening rewards playsets of 21 unique cards for normal play throughout story-based missions, continuing Vara's journey into a nightmare Argenport which first began in Shadow of the Spire.

The nightmare’s voice fills me as I fall into shadow. Grey shapes slip past my eyes, a lifetime of broken promises ringing in my ears. I knew – I always knew – that this city is not mine. These people are not mine. And I will never be theirs.
At the center of it: the Throne sits silent, ancient. Waiting for me to awaken. To see the world as it is.
I awaken to the sound of my mother, shouting my name.

Regular Awakening cards cannot be crafted. They are only available after purchasing the campaign, and unlocked by completing its missions. 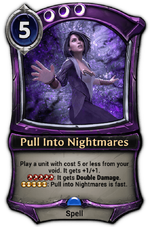 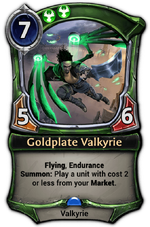 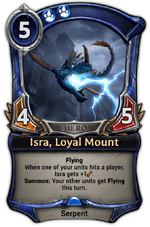 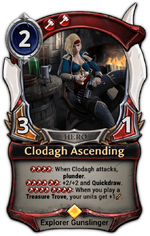 The premium version of Awakening includes the premium playsets of its cards, and a unique Acantha premium avatar. It can be purchased together with the regular version for

2000, or upgraded separately for

A Legendary Bundle is also available. For $39.99, it includes:

Awakening was first revealed on August 18, 2020 in DWD's announcement article for the set.[1]

The Legendary Bundle was available for pre-order one week before the set's release. Pre-ordering unlocked everything except the story campaign and cards when purchased, and came with an additional Draft Ticket.

From August 28–September 1, the new set was showcased in a special Draft where all of Awakening's cards were added to Draft Packs. This was an updated version of the Scion Draft event, a phantom format (unlike normal Draft, drafted cards are not kept) featuring Eternal's most powerful cards.[2]

3,000 each. Chests and packs of Argent Depths were rewarded based on run wins and also for placement in a leaderboard.

Six in-game and platform achievements were added with Awakening.