Blazing Renegade is a unit card.

Blazing Renegade was released in Set 0, a subset of The Empty Throne. Set 0 cards do not appear in The Empty Throne card packs—instead, four non-premium copies are obtained through completing the introductory campaign.

A simplified version of Blazing Renegade, with the same name 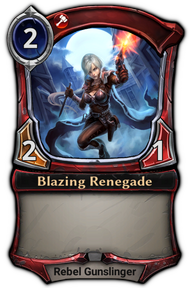 , was created specifically for the campaigns.

Retrieved from "https://eternalcardgame.fandom.com/wiki/Blazing_Renegade?oldid=35906"
Community content is available under CC-BY-SA unless otherwise noted.