You and your units are invulnerable to damage this turn.

Blinding Burst is a Fast Spell. It was a card from Eternal's early Beta period that was replaced by Copperhall Blessing 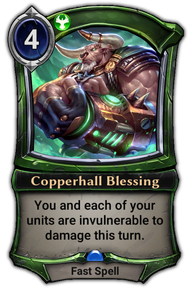 in the transition to Open Beta[1].

Retrieved from "https://eternalcardgame.fandom.com/wiki/Blinding_Burst?oldid=15789"
Community content is available under CC-BY-SA unless otherwise noted.