In the deep shadows of a long-forgotten outpost, strange creatures roost in a ruined bell tower. By day, the surrounding lands are silent – even animals have learned to avoid the place. By night, the colony emerges to feed. [1]

Flying
At the start of your turn, play a 1/1 Vampire Bat with Flying and Lifesteal.

Colony Matron is a unit.

Colony Matron is the third promotional card of Omens of the Past, after Kosul Brigade 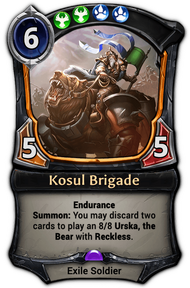 Retrieved from "https://eternalcardgame.fandom.com/wiki/Colony_Matron?oldid=27157"
Community content is available under CC-BY-SA unless otherwise noted.