Crown of Possibilities is a relic card.

Good to play in a deck with EchoEcho:
Get an additional copy when drawn. units—both cards will gain the same battle skill, doubling the value you attain.

Also good to play with units with many battle skills, as it will give a battle skill that unit does not already have.

As of the above mentioned patch, this card only gives battle skills.

Crown of Possibilities will not give the drawn unit a battle skill that it already has. 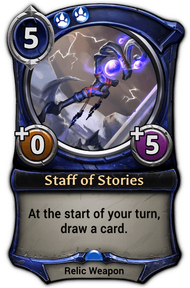