When you play a weapon on Crownwatch Commando he gets Flying and Lifesteal this turn.

Rayph Beisner
Crownwatch Commando is a unit card from Eternal's early Closed Beta period that was removed in the transition to Open Beta. 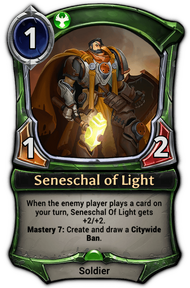