"Like the Dawn, these Radiants arise again and again, given time."
—Excerpt from the journals of Caiphus, Wandering King[1]

or more, play Dawnwalker from your void exhausted.

Dawnwalker is a unit card.

Combine with effects that give Dawnwalker KillerKiller:
May be exhausted one time to attack any enemy unit., like Predator's Instinct 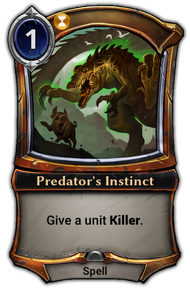 , to create a reusable way to kill your opponent's units.

Dawnwalker's recursion ability applies while it is in the void; you do not need another Dawnwalker in play for it to take effect.

Dawnwalker had a number of bugs throughout Eternal's closed beta.[2] Early on, its effect would trigger but nothing would happen. Even after some bugfixes, sometimes only one Dawnwalker would return when triggered, instead of all copies in the void. Because early versions had a typo in its name, showing "Dawnwaker", some players called the card "Dawnsleeper" when it's ability didn't work. 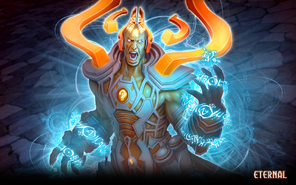