Desperado is a unit card.

You can combine Desperado with UnblockableUnblockable:
Cannot be blocked. spells to easily deal damage and kill enemy units.

Desperado's infiltrate ability will not trigger if the enemy player has no units, and will remain available for later use.

This was originally the card Direwood Assassin 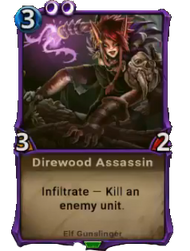 Retrieved from "https://eternalcardgame.fandom.com/wiki/Desperado?oldid=36681"
Community content is available under CC-BY-SA unless otherwise noted.