When the cursed player draws an additional card, deal 1 damage to them and gain 1

.
When one of their units deals damage the turn it was played, kill it.

Dichro's Ruin was the tenth promotional card of Argent Depths. The promo quest period lasted from December 2–8, 2020.[1] It was later moved into Empire of Glass

To celebrate Empire of Glass's announcement and release, Dichro's Ruin's promo quest was the first of four throughout that month. This was the second departure from the normal one-per-month promo schedule, after a similar set of promos was released throughout the previous July (starting with Coslo, Friendly Scavenger 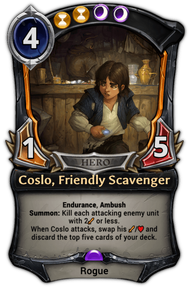