Echoes of Eternity is the eighth pack-based expansion set for Eternal Card Game. It was fully released in February 2020 with 200+ new cards. A subset of its cards were released early in a special Draft Preview.

Sol has faded, and nightmare has engulfed Xulta. A great horde prepares to march on the plateau of Sol’s Altar, shrouded in whispers and fog...
Eremot has come for the Xultan Throne.

Packs of Echoes of Eternity are available for purchase from the in-game store, and individual cards may be crafted with Shiftstone.

Echoes of Eternity continues themes and mechanics introduced in The Flame of Xulta.

CorruptedCorrupted:
When this unit dies, play its Shade.

MasteryMastery:
When this unit deals damage and survives, add to its Mastery total. When the Mastery target is reached, gain the effect.
DecimateDecimate:
When you play this, you can choose to lose one Maximum Power to gain the effect.
InvokeInvoke:
Choose between a random spell, unit, and attachment of this card's factions to create and draw.
SpellcraftSpellcraft:
When played, you may also pay its Spellcraft cost to play the spell.
PledgePledge:
On your first turn, a card with Pledge can be played as a Sigil.
TributeTribute:
Does something when played if a unit went to your void this turn.
Tribute appears on two cards in Echoes of Eternity: Tota Circle 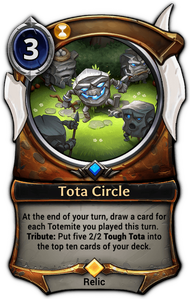 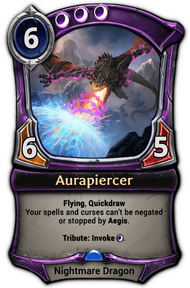 . It was previously only found in The Fall of Argenport and Into Shadow.
RevengeDestiny:
Automatically play when drawn, then draw another card.

Revenge:
The first time this is killed, give it Destiny and put it into the top ten cards or your deck.
Revenge is found on one card, Touch of Resilience 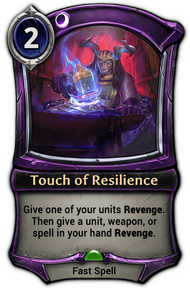 . This battle skill was previously only on cards from Omens of the Past and The Tale of Horus Traver, although it made a later return in Argent Depths.

The Champions of Xulta Bundle[]

Tolek was immediately allowed in the Throne and Expedition constructed formats, and its regular version was unlocked for crafting.

On February 4, prior to Echoes of Eternity's full release, 72 commons and uncommons from the set were incorporated into Draft Packs in a special Draft Preview.[2] These cards were immediately playable in constructed formats, though the cards could only obtained through draft during the preview.

Eleven in-game and platform achievements were added for Echoes of Eternity.