Eternal Card Game Wiki
Register
Don't have an account?
Sign In
Advertisement
in: Flavor, The Dusk Road, Rare,
and 4 more

They argued in steel and in bullets and in blood: two children of a vanished creator. One, rejected at birth, fueled by spite. The other, held as close as a trueborn son, rejected by political necessity. [1]

Once per turn, you may sacrifice another unit to give Failed Reflection +4/+4.

Failed Reflection is a Unit.

Failed Reflection's self-buff effect doesn't end at the end of the turn, the stat increases are permanent. 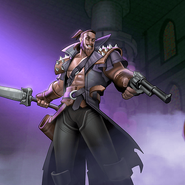