Deal 1 damage to an enemy.
Decimate: Draw a card for each damage Greed's Reward dealt.

Greed's Reward seems bad since you only deal 1 damage and deplete 1 max power for 1 card draw, however, it becomes excellent if you can negate the decimate effect, and/or increase the spell's damage.

Greed's Reward reuses the name and art of an earlier card 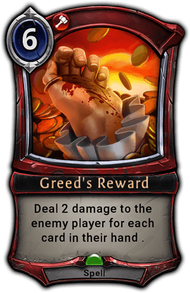 Retrieved from "https://eternalcardgame.fandom.com/wiki/Greed%27s_Reward?oldid=37587"
Community content is available under CC-BY-SA unless otherwise noted.