Infiltrate: This does something the first time it damages an enemy player.

Only works the first time after you play the card.

Infiltrate abilities that target one or more units, such as Desperado 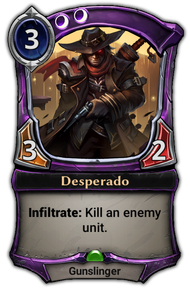 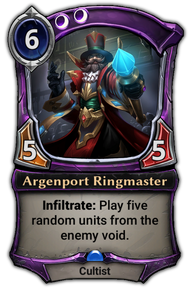 , will only trigger if there is at least one valid target; otherwise they will remain available for later use. However, non-targeted abilities like that of Vishni, Lethrai Highblood 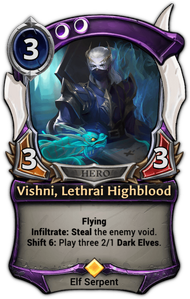 , which targets all units in the void, will trigger even if no cards are affected.

Works well with Unblockable effects and cards that help deal direct damage such as Calderan Channeler190px.

Retrieved from "https://eternalcardgame.fandom.com/wiki/Infiltrate?oldid=33103"
Community content is available under CC-BY-SA unless otherwise noted.