Choose between a random

card to create and draw.

Ixtun Contraband is a spell card.

Ixtun Contraband is noncollectible and can only be generated by effects.

The following cards create tokens of Ixtun Contraband (or transform cards into it): 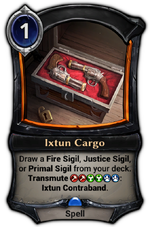 Ixtun Contraband is part of the contraband cycle of 3-faction spell cards transformed from cargo, which let you create and draw a random card from their factions.

The cargo and contraband support the five 3-faction combinations explored in Defiance. The remaining five combinations are supported by the chants cycle in Echoes of Eternity, which use the InvokeInvoke:
Choose between a random spell, unit, and attachment of this card's factions to create and draw. mechanic to draw random cards instead of TransmutingTransmute X:
When you reach X maximum power before playing this, it transforms into a new card. into contraband.

Cargo and contraband were revealed in a Defiance spoiler-season mechanic announcement by DWD.[1] 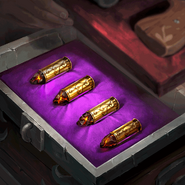 Retrieved from "https://eternalcardgame.fandom.com/wiki/Ixtun_Contraband?oldid=36612"
Community content is available under CC-BY-SA unless otherwise noted.