"Mysteries from the top of the world! Shamanic staves! Potions to withstand the cold. Tomes of Jotun prophecies to predict your future!" [1]

Aegis
Summon: You may choose a card from your hand to swap with an

Jennev Merchant is a unit card.

Jennev Merchant is part of the 5-card merchants cycle of units in Fall of Argenport that let you swap a card in your hand for one in your MarketThe Market:
You may store up to five different cards in your Market when you build a deck..

Before the patch 1.50.0.7103h update to the MarketThe Market:
You may store up to five different cards in your Market when you build a deck. mechanic, Markets could include copies of cards in the main deck, which could be swapped for by these single-faction merchants. This had differentiated them from the multi-faction smugglers cycle of Merchants, which required that a "Black Market" (containing only cards not found in the deck) be used instead.

The merchants (and the Market) were revealed in a The Fall of Argenport spoiler-season mechanic reveal announcement by DWD.[2] 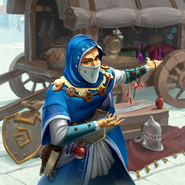 Retrieved from "https://eternalcardgame.fandom.com/wiki/Jennev_Merchant?oldid=39163"
Community content is available under CC-BY-SA unless otherwise noted.