Kaleb is a headstrong warrior with little interest in politics, whose unknown parentage has revoked his claim to the throne.

Charge
Summon: Play a random weapon on each of your

Kaleb, Uncrowned Prince is a Hero unit card depicting Kaleb, one of the original Scions.

Note: Kaleb's quote will change when other Scions are on the board, or when a player has the Eternal Throne totem:

Kaleb's effect also works on multi-faction units, as long as they're

Kaleb will not play weapons that have a restriction on invalid targets. (i.e. Cloudsnake Saddle 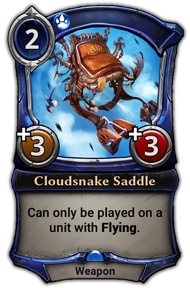 will not be played on a unit without FlyingFlying:
Can only be blocked by other units with flying..)

Playing Kaleb, Uncrowned Prince in a game helps you unlock the Battle for the Throne achievement for playing the 5 original Scions.

Before the release of Argent Depths, new players would receive one indestructible copy of Rolant (and each of the other original Scions) for completing the tutorial. The tutorial was updated with Argent Depths to reward a (notably non-indestructible) copy of Kaleb, Claimless 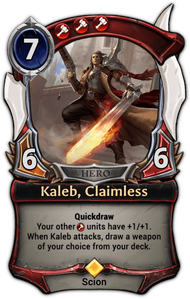 and the new set's other Scions instead, and the previously indestructible copy of Kaleb, Uncrowned Prince could be destroyed as normal.[1]

A functionally identical Kaleb, Uncrowned Prince is included in the player deck in a introductory tutorial mission. Its only difference is that its Legendary rarity was removed. 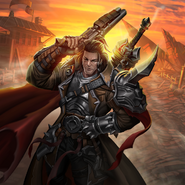