Draw a card of your choice from your deck. It can't be played for five turns.

Know When to Hold 'em is a spell card.

Know When to Hold 'em's "card lock" effect visually displays runes which countdown the effect's remaining turns. The lock only applies to the drawn card, and doesn't affect other copies of the card. While locked, the card also cannot be played by alternate means (ex. Worldpyre's 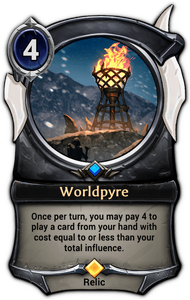 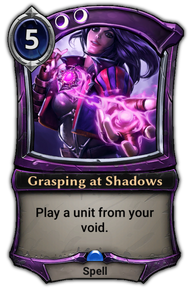 The lock effect is applied to the drawn card's game object, and remains if the card transforms. For example, when drawing a TransmuteTransmute X:
When you reach X maximum power before playing this, it transforms into a new card. card then fulfilling its Transmute condition, it remains locked because the game doesn't consider it a new card. PlunderingPlunder:
You may transform a power card in your hand into a Treasure Trove or a non-power card in your hand into a sigil of its faction. the card also won't unlock it.

If a card with EchoEcho:
Get an additional copy when drawn. is drawn, the copy is also locked. However, cards created by drawn cards' FateFate:
Does something when drawn. effects, such as Jotun Hurler's 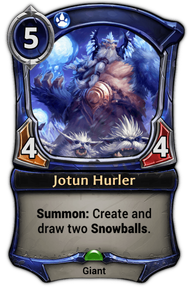 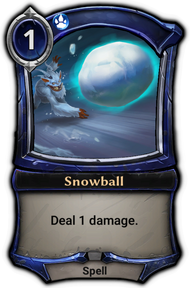 A card with DestinyDestiny:
Automatically play when drawn, then draw another card. drawn by Know When to Hold 'em is immediately discarded since it cannot be played, then another card is drawn per normal Destiny rules.

Know When to Hold 'em and Just Desserts 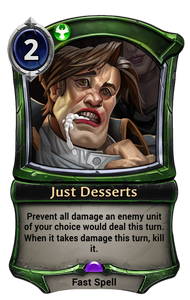 are the 3rd and 4th promotional cards of Argent Depths. They were released together, with thematically related artwork featuring a character seen in the previous Friends in Low Places 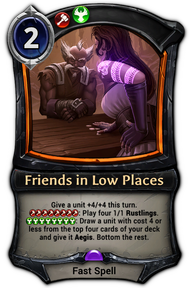 promo card. Their promo quest period lasted from July 20–26, 2020 and was the third of four throughout that month, an experimental departure from the normal one-per-month promo schedule.[2] They were revealed several days before their quest in Eternal's weekly newsletter.[1]

Retrieved from "https://eternalcardgame.fandom.com/wiki/Know_When_to_Hold_%27em?oldid=40495"
Community content is available under CC-BY-SA unless otherwise noted.