When you play a unit with 4

or more, it gets Aegis.
Svetya's Agenda: Wisdom of the Elders, Withstand, Sack the City.

Korovyat Palace is a site card.

After purchasing the Homecoming campaign, beating its mission The Hammer of Kosul unlocks a playset of Korovyat Palace.

Premium versions of Korovyat Palace also unlock if the premium campaign is purchased. Without it, the premium cards can be crafted for

9600 Shiftstone each, after being unlocked in the mission.

The following cards create tokens of Korovyat Palace (or transform cards into it): 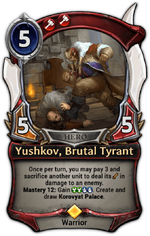 Svetya is a decent creature and it's a pretty good curve with 6->7->8->9 with other cards, using Wisdom can be good for getting more creatures on the board, Withstand can allow your units to survive, and Sack the City supports that furthermore. With the new update to make the units only gain endurance, including aegis could further support Svetya and allow the pay 8 to gradually win out beats and perhaps even the game.