At the end of your turn, double the

of your units.
Empower: Kill an enemy unit.

Martyr's Chains is a relic.

This card is best used with a control deck that's able to gain enough justice to actually play this. Aegis units would particularly benefit as they are tough to kill, and doubling the power and health makes them near impossible to kill. The empower only further contributes to this relic's power. A protection with Martyr's Chains could potentially be helpful, since there are some cheap options in some decks that allow people to easily destroy this relic.

This card is also a great card for a justice market. It can be a win condition or a way to salvage a hand flooded with power.

If a creature has negative stats, i.e. by being cursed by Caltrops 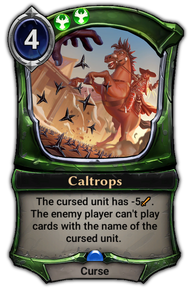 , their stats will get doubled into the negatives.

Retrieved from "https://eternalcardgame.fandom.com/wiki/Martyr%27s_Chains?oldid=39008"
Community content is available under CC-BY-SA unless otherwise noted.