Eternal Card Game Wiki
Register
Don't have an account?
Sign In
Advertisement
in: Christian Schob, Omens of the Past, Legendary,
and 4 more

Means to an End

Means to an End

Lifeforce: When you gain

, discard that many cards from your deck. Then, if you have no cards in your deck, sacrifice Means to an End to deal 25 damage to the enemy player.

Means to an End is a Relic.

This is best used with self-mill cards such as Sporefolk 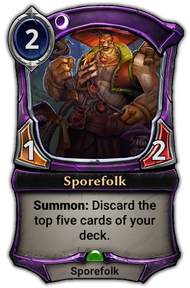 , along with cards that can put it back in your hand. After repeatedly discarding all your cards from your deck, Means to an End stays true to its name in that it can kill an opponent at full health.

One should be careful when using Means to an End. It is best to have a backup plan such as Lumen Reclaimer 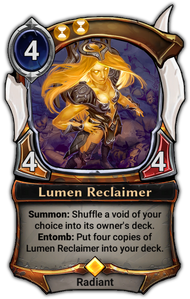 such that you can continue playing just in case the opponent can survive the damage after gaining more health, or blocking the effect with AegisAegis:
Protected from one enemy spell or effect (but not from battle damage)..

If you have multiple Means to an End and trigger their "empty deck" clause, the damage from all of them will be stopped by a single Aegis on the enemy player.

You will not lose the game if you try to discard cards from an empty deck.