Motivated by grief, Izalio’s son has taken up his father’s cause. [1]

When Milos attacks while wielding a weapon, you get +2 Power this turn.
Gunslinger Ally: Double Damage.

This page is about one card for the character Milos. For other uses, see Milos (disambiguation).

Milos Izalio, Heir to Rebellion is a Hero Unit.

This card was revealed as a The Dusk Road spoiler in Dire Wolf Digital's mechanic reveal announcement for AllyAlly:
Does something the first time you have a unit of the named type..[2] 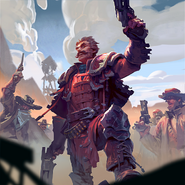 Retrieved from "https://eternalcardgame.fandom.com/wiki/Milos_Izalio,_Heir_to_Rebellion?oldid=33133"
Community content is available under CC-BY-SA unless otherwise noted.