Flying
Summon: You may put a card from your hand on top of your deck. Its cost is reduced by 2.

Nesting Avisaur is a unit card.

If you put a card with EchoEcho:
Get an additional copy when drawn. on top of your deck, when you draw it, both copies of the card will have the decreased cost.

Nesting Avisaur was named Cloudsnake Harrier and had different art during Eternal's closed Beta. It was renamed in the transition to open Beta and given new artwork. The original art and name were later reused for Omens of the Past's Cloudsnake Harrier 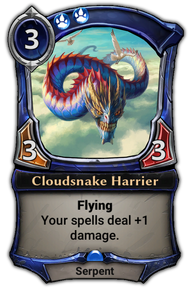 Retrieved from "https://eternalcardgame.fandom.com/wiki/Nesting_Avisaur?oldid=36935"
Community content is available under CC-BY-SA unless otherwise noted.