Oni are fierce warriors, but abide by strict codes of honor and fealty.

Oni Ronin is a unit card.

The following cards create tokens of Oni Ronin (or transform cards into it): 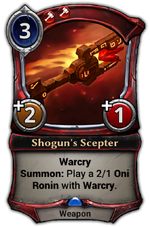 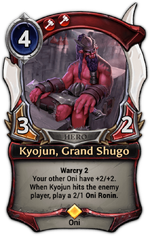 An alternate-art version of Oni Ronin was released exclusively for the Eternal Championship Qualifier: ECQ: Shadow of the Spire tournament in May 2020.[1] It cannot be crafted or destroyed for Shiftstone. 4 copies were rewarded for participation in the event.

A staple in aggro decks, Oni Ronin is the lowest-cost WarcryWarcry:
When this attacks, the top unit or weapon of your deck gets +1/+1. unit in the game.

Its low cost and 2 attack make it a perfect candidate for early boards, since every time he attacks he'll buff the top unit or weapon in your deck. To try and keep him alive, low cost removal like Torch 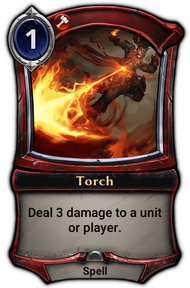 can be useful to remove blockers (or at least to trade well). Depending on the other factions it is paired with, certain SpellSpells:
A one-time effect that costs power and goes to the void once played. Some spells are fast and can be played during the enemy player's turn as well. or AttachmentAttachments:
Attachments are played on units and players and remain until they are killed. They include weapons which grant stats, curses which attach to enemies, and relics which attach to players. cards can help it through. 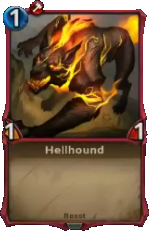 Alongside the alternate-art version, a Oni Ronin-themed cardback was also rewarded to players in the ECQ.