Steam News
(Editor's note: The in-game client version of this patch was unchanged from the previous releases. We added the "c" to distinguish between these updates.)

We've been excited to see the development of the new Expedition metagame and look forward to seeing what players bring to next month's ECQ. While we’re keeping an eye on what’s emerging from the release of The Flame of Xulta, today's changes are aimed at the Throne format.

Champion of Fury and Snowcrust Yeti
While we enjoy Yeti having their time in the spotlight, neither of these cards do much to create a Yeti-specific experience. They are powerful cards in absolute terms, not necessarily in conjunction with cards like Wump 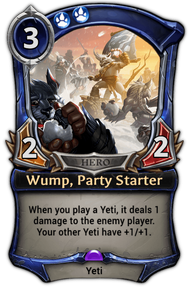 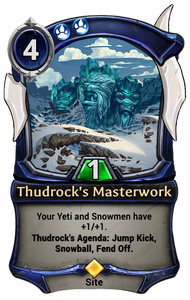 . And since both Champion of Fury and Snowcrust Yeti are powerful in aggressive strategies, they tighten the range of Yeti decks competitive players can explore. We hope these changes give players incentives to try out different Yeti cards and play patterns while preserving what is fun and different about our furry friends.

Garden of Omens
Our first promo site has been a hit. We like how it gives players a diverse mix of spells to help them fight against a variety of strategies. Nonetheless, its proven so popular we're taking a point of durability off and adding more influence requirements to ensure it doesn't overly crowd out competing options in multi-faction decks.

Vanquish and Defiance
Both of these cards speak to answering specific types of threats--big units with Vanquish, and inexpensive attackers with Defiance. While poring through our data, we have found that many Justice decks play both, suggesting that they are not functioning as surgical responses to certain units, but rather as part of a too-ubiquitous experience of attempting to remove each opposing unit. We believe these changes move both cards closer to being things you consider in the context of cards that ebb and flow in and out of the metagame, rather than foundational parts of the experience.

Vara’s Intervention and Miris Nightshade
We're buffing two cards for Unseen decks. Shadow Unseen strategies have never been a major player in Throne. These changes aim to give them another chance.

These changes should help expand the range of experiences available and open new creative opportunities in deck-building. As always, we’ll be continuing to observe play patterns and trends both in ladder play and tournament competition.

(Note: The following changes were not detailed in the source post.)