(Editor's note: The in-game client version of this patch was unchanged from the previous releases. We added the "c" to distinguish between these updates.)

Promises by Firelight has had a major impact on the Throne metagame, and no card contributed to that impact as much as Endra, Shavka's Champion 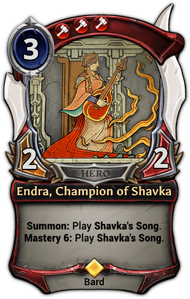 . Endra developed a passionate following, pushing her to the extreme with dedicated combo decks built around playing Shavka's Song 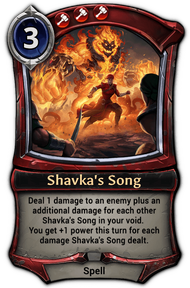 as much as possible. This wave of new Endra decks truly shook up the Throne landscape for the first time in a while.

In the days that followed, players quickly adapted to the new threat. While Endra decks have continued to be the most popular, their overall usage has declined as the format has adapted to them. In fact, even the most successful Endra decks of the past week have had barely above average win rates as the metagame has become particularly hostile to unit recursion strategies.

Endra has undeniably warped the format; and while some of that is good, too much can limit deckbuilding. Overall this has turned out much tighter than we’d like; there were too limited a mix of viable strategies to fight back with. Highly tuned versions of the Endra deck have also proven too fast, making opening hands more swingy than desirable.

While there is a place in Eternal for combo decks, and Endra can lead to some fun ones to play with, she’s come out of the gate too strong and too popular for how frustrating and repetitive it can be to play against game after game. To that end, we’re making a couple of nerfs to help bring her back into line with the rest of the format.

Endra’s efficiency was just too great, and the faction requirements meant to reduce the ease at which she could be exploited by three and four faction decks was insufficient. By increasing both her cost and influence, her core functionality is being preserved as both a compelling option for combo decks and “fair” decks, while slowing her down and increasing the opportunity cost.

Note: As Endra, Champion of Shavka is only available from the Promises by Firelight campaign, falling outside of our normal system for refunding crafted cards, we are giving a one-time grant of a 1,250 gold to users who purchased the campaign (similar to previous campaign changes). Users who upgraded the card will receive an additional 1,250 gold. Players will of course keep all their copies of Endra.

In looking carefully at the cards surrounding Endra, we identified two specific cards that were the primary contributors to the problematic elements of the card. The first was Evenhanded Golem 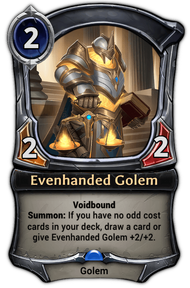 , as many of the best synergies and themes that worked for it also worked for Endra and stacked together too efficiently. The change to 3-cost addresses this area. The other card was Haunting Scream.

Haunting Scream has long been one of the most dangerous cards in the game, given its ability to cheat power costs, combined with its powerful synergies, burst, and one-turn kill potential. While Endra was the straw that broke the camel’s back, so to speak, this is far from the first time Haunting Scream has gone too far. That said, the card is a fan favorite, fun to build around, and can be a backbone of countless strategies. While Haunting Scream is quite strong, we mainly want to slow it down a little and reduce the ease in which it can be played as part of a multiple spell turn. The change to 3-cost is a meaningful one, and we also wanted to take this opportunity to increase the range of Scream options by allowing it to bring back 5-cost units. We’re very sensitive to the risk of any changes surrounding Endra potentially impacting non-Endra decks; so this Haunting Scream change is not one made lightly. Our hope is that this actually increases Haunting Scream’s functionality in a real way, while also slowing it down in a much-needed way.

Sandspitter’s Summon is more powerful the earlier it can be played, so we believe this change to be a substantial buff, opening it up as a potential option for combatting certain types of combo or spell-heavy strategies.

Predatory Carnosaur has been crowded out at the 7-spot and we thought it would be an interesting option to revisit, particularly as a tool against large Aegis units. We explored the possibility of a return to 6/6, but found it to have too much of a suppressing impact on mid-sized units. Our hope is that this change improves the speed and ease at which it can be used to for specific tasks, without crowding out other potential options.

While our hope is that both of these changes increase the playability of these cards, they are not strict buffs and will both be eligible for refunds, as will Haunting Scream.

As announced last month, we’ve been planning a series of buffs that promote novel deckbuilding and increase the range of counterplay available to players looking for tools against combo, spell-heavy, or void-based decks.

The goal with these changes is to help enable a variety of uncommon decks, spawn some new ones, and hopefully provide a few more options for when unusual strategies go too far.

As always, we’ll be continuing to monitor community feedback and gamewide play data to make sure each of Eternal’s formats is fun, healthy, and exciting to explore. Keep an eye out for our next set of balance changes coming in the last week of January!

These token cards were updated to match the power cost and influence requirements of the cards that create them (Endra and Phoenix Stone).

(Note: The following changes took place the next day, and were detailed in a separate source post.[1])

We have addressed the following issues:

If you have any questions, or encounter any other issues, please let us know at support@direwolfdigital.com or via in-game Feedback.

Retrieved from "https://eternalcardgame.fandom.com/wiki/Patch_Notes/1.49.0.7017c?oldid=33441"
Community content is available under CC-BY-SA unless otherwise noted.