Eternal Subreddit
(Editor's notes: The in-game client version of this patch was unchanged from the previous release. We added the "b" to distinguish between these updates.

Some unlisted changes and fixes were made with this update. These are marked with an asterisk*)

Echoes of Eternity is Live![]

The 8th major set for Eternal, Echoes of Eternity, is now available and brings over 200 new cards to the game!

Five new theme decks have been added to the in-game store, each available for 3,000 Gold or 250 Gems. A theme deck bundle is also available for 1,100 Gems. It includes all 5 decks and an exclusive, alternate-art Clockroach 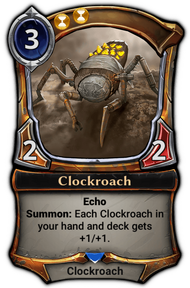 The “Owl” type has been consolidated into the “Bird” type. The following cards have been updated:

Merchants, Smugglers, and Bargains will now allow you to store cards of any faction in your marketThe Market:
You may store up to five different cards in your Market when you build a deck., still following either the Market or Black Market rules determined on the card. However, they can still only select cards out of the Market that their ability specifies.

Each of The Flame of Xulta theme decks have been updated in the store to be Expedition Legal with the release of Echoes of Eternity.

(Note: The following changes took place the same day, and were detailed in a separate source post.[2])

A few fixes to follow on today's set release have been rolled out:

(Note: The following changes took place the next day, and were detailed in a separate source post.[3])

(Note: The following changes took place a couple days later, and were detailed in a separate source post.[4])