(Editor's note: The in-game client version of this patch was unchanged from the previous releases. We added the "h" to distinguish between these updates.)

Shadow of the Spire has wasted no time making a big impact on both Throne and Expedition, and so far, the landscape is rapidly evolving. We’ve been working on an update with changes along these lines for a few weeks now, but wanted to see the extent of the impact Shadows of the Spire would have. We looked at this weekend’s Spring Championship: Expedition as a last chance for the field to convince us that the tools exist to keep up with the Fire/Time/Shadow Sacrifice decks. As the tournament results shook out, it became clear that the overall trends of the past few weeks were holding strong and required action.

To that end, we will be making the following card changes tomorrow, May 12th:

Evenhanded Golem has been a polarizing card, as of late, being some players’ favorite card and others’ least favorite. While most would agree the quest it presents you with is an interesting one that changes deckbuilding in a way no other card does, most would also agree that its power level has been a little high. While the recent buffs to Merchants have increased their usage a fair bit, the recent changes to MarketsThe Market:
You may store up to five different cards in your Market when you build a deck. have been a greater boost to even-decks that we’d like, with their newfound ability to easily utilize BargainBargain:
Can be played from your Market if you met its requirement this turn. Bargain cards can be in your deck and market at the same time. cards.

While this change does not directly target the “powerful” part of the card, it’s frequently the case that preserving strengths and increasing weaknesses leads to more room for the metagame to evolve and cards’ personalities to stand out, rather than trying to squeeze everything together. Our hope is that this change will preserve the powerful card draw reward for doing the work Evenhanded Golem asks of you, while introducing a real weakness in the form of the tempo loss from having such a modest impact on the board.

Besides, the rate matters, and there’s a big difference between a 3-for-1 and a 2-for-1. Both are powerful, to be sure; but with this new stat line, it will take more work to actually get a full three cards out of it. We were also interested in distributing the nerfs lightly across several cards, rather than just going hard after one or two. Other changes from this patch will hopefully harmonize with the Evenhanded Golem change to further return the format to a healthier balance.

Nahid’s Distillation is an extremely powerful source of card draw with its heart in the right place; however, at the end of the day, it has proven itself just too much in both Throne and Expedition, crowding out lots of alternatives and invalidating several strategies that cannot keep up with it. While this change is substantial, our hope is that this change still leaves the card a viable option for players looking to refill (rather than a ubiquitous cornerstone).

Kato has been a little too quick to reach his full potential; and reaching this powerful end-game has been a little more reliable than we’d like. As a defensive tool Kato is a great way to slow down an early rush, but combined with other CorruptedCorrupted:
When this unit dies, play its Shade. units, it can lead to games bogged down too reliably. He leads to a lot of exciting moments and rewards a lot of choices both in deckbuilding and in game; he’s doing too much to push the games to being just about making 8/8s early and repeatedly.

In addition to Kato, Arena Herald, we wanted to pull back a little on another corrupted unit that has been seeing more and more play in sacrifice-centric decks. While there are a lot of options for profitable units to sacrifice, Unfamiliar Interloper was pushing decks more and more together, leading to less diversity overall. This change preserves its influence-fixing flexibility, while making it a little less “free” to sacrifice.

Like Unfamiliar Interloper, Rectifier was yet another high rate corrupted design that could lock up the ground, early. Reducing its strength makes the card less of a roadblock for aggressive decks; and the extra influence requirements reduce the ease at which it can be splashed in a many faction deck.

Eremot’s Machinations can lead to some epic comebacks, but at five-cost, it was proving too powerful a form of inevitability against the field as a whole. We’ve also added extra influence requirements to help reduce the ease in which it can be used in strategies with three or more factions, similar to Rectifier.

While the new Market spells have really opened up new space and changed the way we think about Markets, Blazing Salvo has proven itself too efficient for Fire decks of all shapes and sizes to pass up. Our hope is that this change will preserve it as a powerful option for aggressive decks (albeit, a little riskier of one), while reducing the amount players feel compelled to use it, even in slower, more reactive decks.

Ark of Sol has a lot of good gameplay associated with it; but the Market changes have lowered the opportunity cost of the card further than is healthy for such an aggressively costed card. This change preserves the powerful ramping capabilities, including when used alongside Crack the Earth 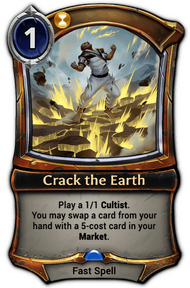 , while generally increasing the tempo-tradeoff you have to make (especially for even decks that were able to exploit it to have an efficient one-power play, despite their deck’s fundamental conceit).

We also wanted to tweak a couple other corrupted designs to shift where their rate is located. Purgedriver’s extra strength should make the piece match-up better on the table, while the extra influence keeps it less available for three or more faction decks. Two-Face losing a point of health makes it weaker in sacrifice decks, to be sure; but we’ve also reduced its corrupted cost for players actually using it for its primary role. Since these are not strictly buffs, we will as always be offering sell-backs to any players who crafted them.

We’re also taking this opportunity to make some upgrades to a diverse mix of underplayed cards that we hope will make them more interesting options to explore. Our next balance check-in will be early June. In addition to the aforementioned balance changes, however, we’re also making some additions to the Eternal Draft Pack.

Starting tomorrow, we’re updating the Draft format. To facilitate a new world, a new draft format to explore, we’re adding 73 commons and uncommons (which will also be added to Expedition), as well as changing the weighting of many cards. The order of the packs is also switching (further changing up the experience), so that the new pack order will be:

You can see the full list of cards available for Expedition and the Draft Pack here! Be sure to check it out when it goes live tomorrow!

Retrieved from "https://eternalcardgame.fandom.com/wiki/Patch_Notes/1.51.0.7198h?oldid=37435"
Community content is available under CC-BY-SA unless otherwise noted.