If you have any questions, or encounter any issues, please let us know at support@direwolfdigital.com or via in-game Feedback (under Options).

(Editor's note: This update was delayed by one day due to storefront issues.[1] The sources detailing the following update changes were posted prior to this delay, and dates may reflect that discrepancy.)

(Note: The following changes were detailed earlier in a separate source post.[2])

The Argent Depths Pre-Order Bundle will be available on June 17 for $49.99, and contains:

* The regular version of Rolant, Iron Tyrant will also be craftable in-game as soon as the preorder is available.

As a special thank-you for supporting the ongoing development of Eternal, players who pre-order directly from the Eternal Web Store will also receive:

Don’t miss your chance to get a great deal on the newest cards & cosmetics! The Argent Depths Pre-Order Bundle will leave the store on June 24 when the set goes live!

As always, the arrival of a new set shakes up the Draft format with new cards to bring into battle and new strategies to explore. We’re getting the fun started early with a special Draft Preview window that kicks off next week!

Starting on June 17 when the Pre-Order begins, a curated pool of 63 new commons and uncommons from Argent Depths will become available in Eternal Draft Packs! You keep any cards you draft and can use them immediately in Throne and Expedition play, so the Draft Preview gives you a chance to get hands-on with some sweet new stuff before the official release!

We’ll be previewing some of the new mechanics of Argent Depths, alongside more Draft Pack updates on Monday.

Keep an eye out for updates to the full list of Eternal Draft Packs next week, and get ready to jam some new cards!

(Note: The following changes were detailed in a separate source post.[3])

When we announced the mid-June balance patch last month, we weren’t sure if one would be needed or appropriate, with Argent Depths releasing next Tuesday and the Draft Preview beginning tomorrow. For starters, Throne is in a pretty good place (no strategy is overly dominant and no faction appears in more than half of the top ten archetypes); and we’re excited about what the upcoming set brings to the table.

As for Expedition, the numbers point to the community having largely solved the most recent one; however, a brand new Expedition is coming with the release of Argent Depths, so we have decide to take this opportunity to primarily focus on a variety of buffs to interesting build around or niche cards that may not have gotten much of a chance in the spotlight. But first, the nerfs, all of which focus on aggressive Fire cards that have contributed to Fire having a little too much resiliency stacked with charge:

Tota Pioneer is a powerful tool for Fire aggro decks looking to be better as games bog down. While not strictly charge, it can give virtual charge on account of playing it and using its ability in the same turn. While we’re big fans of the gameplay, we did want to restore some of the checks and balances around Fire decks that used to have more vulnerability in the form of 1-health units.

Thunder of Wings is likewise dropping a point of health to give it a little more vulnerability, given how hard and fast it hits.

Two major contributors to the powerful resiliency and charge damage of Fire aggro decks, both Phoenix Stone and Pyre Elemental were also contributing to Blazing Salvo’s over-representation (as well as leading to a lack of diversity among markets).

Before getting into the buffs, we wanted to address a few recent cards that have been in a fair number of discussions, lately. First, Jekk, Mercenary Hunter 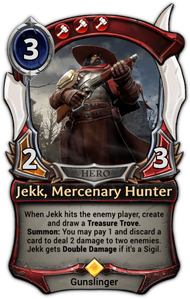 has made major waves in both constructed formats, since his arrival last month. It is a strong card that can push a player further ahead or help them catch up against an early rush, and it’s definitely one we’ve been watching closely. The impact he’s had in Throne has been positive, and strategies appear to have been able to adapt quite effectively.

In Expedition, he’s had a much more pronounced defining impact, but with the Expedition changing shortly, we’re excited to see it in the context of the new format before making any decisions on it. We’ve definitely heard the feedback, and while we fully expect it to continue to be an excellent card, we’re hopeful that the new format might be better suited for him. That said, he’s very much a card we’ll be continuing to monitor closely in the days to come. 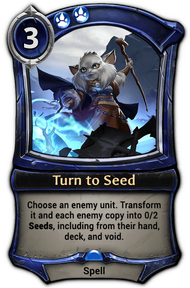 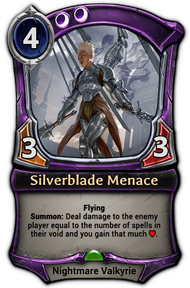 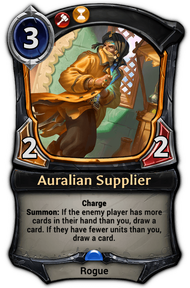 are also popular cards that we’re watching closely. With Turn to Seed, Primal got a great new tool for more counterplay against decks “all-in” on a specific unit. So far the numbers do not suggest it has proven imbalanced, and it has led to some innovative deckbuilding by players capitalizing on the “Seeds” 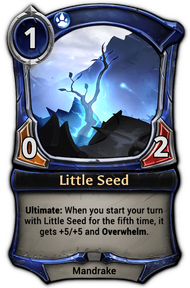 it provides, as well as contributing to a little bit more diversity among threats.

Silverblade Menace has been a great new option for players hoping for a big effect against those heavy-removal decks. While some feared it would kill control decks, instead we’ve seen a ton of adaptation and counterplay making for much more dramatic and exciting games, with more comebacks, as well as more incentive for the control decks to actually go for a win, instead of sitting around turn after turn. We’ll continue to watch for the risk of it being too decisive in games, but so far, it appears to have had a healthy impact on both formats.

Auralian Supplier’s power level has never been the real critique, but rather how much stronger it is on the play versus the draw. While it can be fun to set the card up, and it can help punish unitless strategies, if too much of the card’s power comes from the games you go first, that’s not great. So far, the numbers in throne do not suggest it imbalancing play vs draw in any meaningful way; however, in Expedition, it has been a little more swingy in this regard than we’d like. Again, we’d like to give the card a chance in the new format, but it’s definitely one we acknowledge could prove problematic, if things break in an unfortunate way.

As we prepare for some updates to the on-boarding campaign with Argent Depths, Rolant’s Honor Guard fits better in this new form. As always with any changes to cards that are not a strict buff, we will be offering refunds to any players who crafted copies.

This list contains quite a few oddballs, but we’re hopeful that every card on this list has some purpose for some players and we’re excited to experiment with this wide mix of buffs to underplayed cards.

We’re looking forward to Argent Depths coming soon and will check in again on any potential balance changes mid-July.