Argent Depths is now live on all platforms! Come see what the newest set of Eternal has to explore!

(Note: The following changes were detailed in a separate source post.[1]) 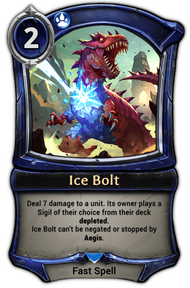 Each of our original Scions is getting a fresh card in Argent Depths...These new Scions will be replacing their original cards in the onboarding tutorial. With the release of Argent Depths, new players completing the campaign will earn copies of these Scions with the completion of each wing. Current accounts will be able to collect these scions by crafting them or earning them in packs of Argent Depths. Additionally, we are removing the destruction restriction on all of the original Scions. Players will now be able to destroy for shiftstone any copies of the original or new Scion cards.

Fans of Gauntlet and Forge will notice new AI decks added with the release of Argent Depths. And older Gauntlet decks will be updated to include our new Scions.

Argent Depths‘ release will mark the start of a new Expedition. Our latest Expedition format will consist of the following

The draft format will be updated to

The Eternal Draft Pack for Expedition and Draft is updating with the new set. Check out the full list of cards here.

(Editor's note: these fixes were made in the following days.)

We hope everyone is enjoying the release of Argent Depths! Thanks to your feedback and user reports, we have fixed the following issues with the latest update:[3]

If you encounter these issues after restarting Eternal, or have any questions, please let us know at support@direwolfdigital.com or via in-game feedback under Options.

We have made the following fix:[4]

If you continue to run into this issue after restarting Eternal, please let us know via in-game feedback (under Options), or at support@direwolfdigital.com.

As always, if you run into trouble in game, please drop us a line at Support@DireWolfDigital.com.

Thanks for supporting Eternal!

We have made the following fixes and improvements:[6]

If you encounter any of these issues after restarting Eternal, or have any questions, please let us know at support@direwolfdigital.com or via in-game feedback under Options.