Power is one of Eternal's primary mechanics. It is also an associated card type, and a gameplay zone where power cards go when played.

Power is a resource gained by playing power cards. Players have both a current and maximum power, displayed in a tracker near their avatars. Current power is used to pay for costs to play other cards and use abilities, and is replenished to the maximum at the start of the player's turn.

Card text about "power" generally refers to current power, unless the term "Maximum Power" is used.

Power cards are the only card type without costs or other requirements to play them. Instead, players are limited to playing one power card each turn.

Playing a power card increases both its player's current and maximum power, and executes any other text on the card. Most power cards provide one or more influence, another resource for playing non-power cards.

Depleted is a keyword specific to power cards. Depleted power cards increase maximum power and give influence as normal, but don't increase the player's current power that turn.

Power cards are put into their player's power zone after being played. Each player's power zone is visible to both players, and can be viewed by interacting with their power tracker. Currently, no cards or mechanics interact with cards in the power zone, although DecimateDecimate:
When you play this, you can choose to lose one Maximum Power to gain the effect. abilities can reduce a player's maximum power.[Note 1]

Because power is necessary for playing all other cards, a balance between power and non-power cards is required when building a deck. The following restrictions apply to the all decks:

Like most cards, power cards are limited to four copies between the deck and MarketThe Market:
You may store up to five different cards in your Market when you build a deck. (in constructed play). The exception to this rule are the five #Sigils, any number of these (within the restrictions above) may be added to a deck.

Several cycles of power cards have been released, each with different properties. These cycles are based on the five factions, or the 2 and 3-faction alliances.

In addition to these cycles, there are the basic Sigils, and a small number of faction-neutral power cards which either do not provide influence, or conditionally provide an influence of your choice.

Sigils are the five basic power cards, one for each influence type. Sigils are the only cards with no restriction on the copies that can be added to a deck.

Seats are a cycle of 10 power from The Empty Throne. Each Seat provides two different influence, but is Depleted unless the player has a Sigil in their hand.

Banners are a 10-card cycle, released across The Empty Throne and Omens of the Past. Each Banner provides two different influence, but is Depleted unless the player has a unit in play.

Waystones are a 5-card cycle from The Dusk Road. Each provides one influence, and has an additional effect if you have at least four of that influence type after playing it.

Crests are a 10-card cycle, released across The Dusk Road and The Fall of Argenport. Each provides two influence, is Depleted, and has ScoutScout:
Look at the top card of your deck. You may put it on the bottom..

Standards are a 5-card cycle from The Fall of Argenport. These provide one influence and are Depleted. These all have Transmute 5—if you reach 5 power before playing a Standard, it will change into a specific 2-cost tactic fast spell.

Tokens are a cycle from Defiance and Echoes of Eternity. These provide one influence from a choice of three and are Depleted.

Coins are a 5-card cycle from Dark Frontier. These provide one influence and are Depleted, and have an additional effect if you have triggered OnslaughtOnslaught:
Does something when played if you or any of your units have attacked this turn..

Insignia are a cycle from Dark Frontier and The Flame of Xulta. Alternate art versions of the Insignia from the latter set are available in The Trials of Grodov. Each provides two influence and is Depleted if you have any cards from other factions in your deck.

Emblems are a 5-card cycle from The Flame of Xulta. Each provides one influence and deals one damage, and has a DecimateDecimate:
When you play this, you can choose to lose one Maximum Power to gain the effect. ability that lets you create and draw a unit if you have three influence from the card's faction.

Symbols are a 5-card cycle from Argent Depths. These provide two influence of a single faction and are DepletedDepleted:
Isn't usable the turn it is played..

Vows are 5-card cycle from Argent Depths. These can provide undepleted power and one influence of player choice at the cost of 1

, but can also be played as colourless. Currently only 5 vows exist, though the remaining 5 cards in the cycle are expected to be released at some point.[Note 1]

Cylices are a 5-card cycle from Argent Depths. Each can is depleted unless one influence requirement is met and creates and draws a Treasure Trove 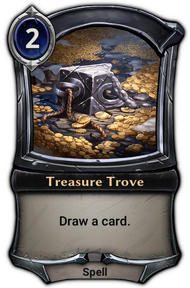 if both are met. Due to their relatively high power level and ubiquity, they were nerfed in the 2/1 Live Balance Update raising the influence requirements from double to triple. Similarly to vows, only 5 cylices exist, but they're expected to be released in the future.[Note 1]

Paintings are a 5-card cycle from Empire of Glass. They provide two influence and are DepletedDepleted:
Isn't usable the turn it is played. unless they're very early in the game. Currently only 5 paintings have been released, though the cycle is expected to be finished at some point.[Note 1]

Runes are a 5-card cycle from Revelations. They are DepletedDepleted:
Isn't usable the turn it is played. unless the player has played a Sigil before, but they can be amplifiedAmplify:
When you play this, you may pay the Amplify cost any number of times to gain the effect. to play a spell.

Sketches are a 5-card cycle from Revelations. They are DepletedDepleted:
Isn't usable the turn it is played. unless the player has played a Sigil before, but they can be amplifiedAmplify:
When you play this, you may pay the Amplify cost any number of times to gain the effect. to play a relic.

Tomes are a 10-card cycle from Cold Hunt and Unleashed. They are DepletedDepleted:
Isn't usable the turn it is played. during player's first three turns.

Several mechanics or card categories are related to power and power cards: