At the end of your turn, if you have no cards in your hand, draw Praxis Outlaw from your deck.

Praxis Outlaw is a unit card.

Beat the first mission in Jekk's Bounty, "Rogues and Ruffians".

The following cards create tokens of Praxis Outlaw (or transform cards into it): 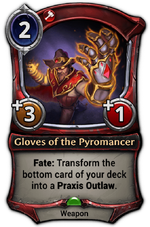 Play this in a deck that can empty its hand really quickly, either an aggressive deck with a low curve, or a deck that discards its cards using a card like Feln Cauldron 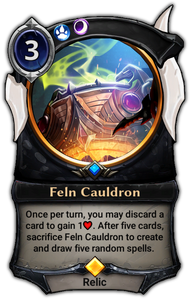 and could use the extra cards. 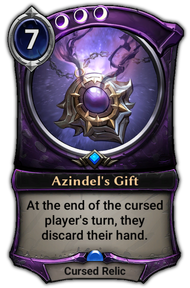 If aggressive decks do run this card, they run it as a 1 of to give them a bit of extra steam and to decrease the chances of drawing it earlier in the game.

Unlike most cards, this does not need to be in play for the text to activate; it only needs to be in the deck.

Only one Praxis Outlaw will be drawn from your deck if your hand is empty at the end of your turn.

Praxis Outlaw appears to trigger the last out of "End of Turn" effects, as it will trigger after Azindel's Gift

Retrieved from "https://eternalcardgame.fandom.com/wiki/Praxis_Outlaw?oldid=42694"
Community content is available under CC-BY-SA unless otherwise noted.