Regen is a battle skill keyword that stops all damage to a unit the first time it would be damaged. It was introduced in Empire of Glass. 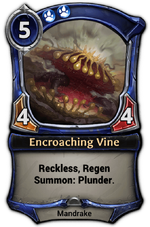 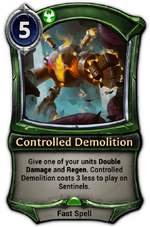 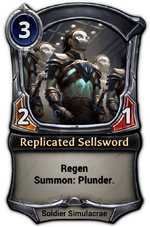 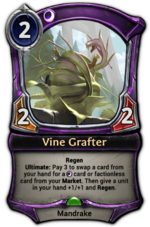 Find cards with Regen in its category page.

Regen:
The first time a unit with Regen is dealt damage, prevent it.

Like AegisAegis:
Protected from one enemy spell or effect (but not from battle damage)., Regen is a consumable battle skill. Regen appears as a red, fiery aura on units while active. Units with the skill gain this aura when played. Otherwise, the aura appears on units as they gain Regen from effects, or as a weapon with Regen is played on them.

The first time a unit would take any damage while it has an active Regen, that damage is prevented like a single-use instance of invulnerable to damage. This stops damage from a single source or from multiple, simultaneous sources. It also stops the effects from damage-based abilities, like LifestealLifesteal:
When this deals damage, you gain that much

., DeadlyDeadly:
Kills any unit it damages., and DecayDecay:
Permanently reduces the

of units and relic weapons it damages..[1]

After Regen prevents damage, the aura is removed, and the keyword will appear grayed out while inactive. If a unit or weapon with Regen leaves play and is later returned, Regen will be reactivated for an additional use.

Regen is a potent ability in combat, preventing damage whether the unit is attacking or blocking.

When an attacking unit with an active Regen is blocked by multiple units, damage from the blockers happens simultaneously (despite the staggered animations), so Regen stops the damage from all of them.

A unit regenerates when its Regen is used, and some cards have additional abilities when this happens.

Find cards which care about with Regen in the "Regen matters" category page.

Interaction with Aegis and Invulnerable[]

If a unit has both an active Aegis and an active Regen, Aegis takes precedence to block any damage-based effects that would affect both abilities.[2] The Aegis will be used, and the Regen will remain active to prevent the next damage the unit may take.

If a unit is invulnerable to damage while it has an active Regen, invulnerable will apply first, leaving the Regen intact.[2]

Regen was first seen on the Queen of Glass 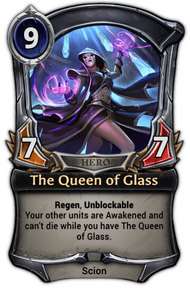 spoiler in Dire Wolf Digital's announcement article for Empire of Glass.[2] Its effect was later revealed in the set's spoiler-season mechanic reveal article for the keyword.[1]