Deal damage to the enemy player for all of the damage you have taken this turn.

Retribution (beta) is a Spell. It was a card from Eternal's early Alpha-Beta period that was removed in the transition to Open Beta. [1] 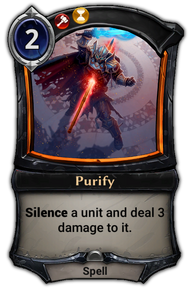 Retrieved from "https://eternalcardgame.fandom.com/wiki/Retribution_(beta)?oldid=25657"
Community content is available under CC-BY-SA unless otherwise noted.