Sandstorm Scarf is a Relic.

This card was revealed as a Fall of Argenport spoiler. [1] 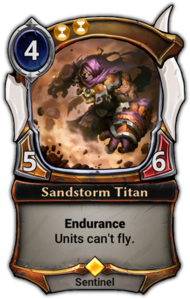 art during Eternal's Beta, and the community's common joke asking when it would get its scarf back.[2]

Retrieved from "https://eternalcardgame.fandom.com/wiki/Sandstorm_Scarf?oldid=32164"
Community content is available under CC-BY-SA unless otherwise noted.