Eternal Card Game Wiki
Register
Don't have an account?
Sign In
Advertisement
in: DY 33, The Empty Throne, Legendary,
and 4 more

Sandstorm Titan is a Unit.

Sandstorm Titan is a very powerful unit since its 5/6 stats are practically unmatched for the cost of 4 power. Its EnduranceEndurance:
Readies at the end of your turn, can't be stunned, and can't be exhausted except to pay costs. means it cannot be stunnedStun:
Exhaust a unit. It doesn't ready on its owner's next turn. (Exhausted units can't attack or block). to stop it from attacking or blocking (unless it is silencedSilence:
Remove all text from a card and its attachments.).

Titan is a good card to setup a solid endgame and prevent opponents without proper removal from getting otherwise free damage with FlyingFlying:
Can only be blocked by other units with flying. units.

Even though Flying units must attack and block as though they don't have Flying, it is not removed. Effects such as Windshaper 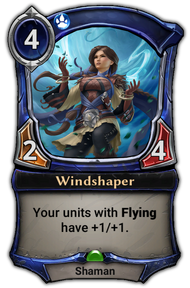 Units will be able to fly again when Sandstorm Titan leaves play or is silenced.

This effect is not stopped by AegisAegis:
Protected from one enemy spell or effect (but not from battle damage)., either on the units or on a player.

A popular nickname for this card is "Darude" after the popular song "Darude Sandstorm". [1] The VFX used to feature a scarf but this was removed with the release of Jekk's Bounty. A common joke was to ask when it would get its scarf back. DWD referenced this meme in the flavor of the card Sandstorm Scarf 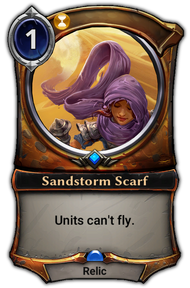