of your units this turn, or
– Draw a unit of your choice from your deck and double its

Siraf's Choice is a spell.

Siraf's Choice was revealed as a Fall of Argenport spoiler.[1]

Siraf's Choice is part of the first choices cycle of 2-faction choose one spell cards.

The remainder of the first cycle, including Siraf's Choice, was completed in The Fall of Argenport, based on other Eternal characters: Ijin's Choice 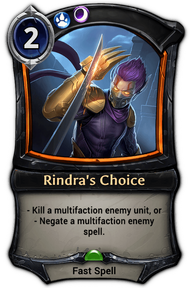 Retrieved from "https://eternalcardgame.fandom.com/wiki/Siraf%27s_Choice?oldid=30533"
Community content is available under CC-BY-SA unless otherwise noted.