Skills are differentiated from other keywords in that they can appear on a unit with no other text. For example, a unit can have the FlyingFlying:
Can only be blocked by other units with flying. or WarpWarp:
You can play this from the top of your deck. skills as stand-alone keywords, but cannot have InfiltrateInfiltrate:
This does something the first time it hits the enemy player. or StunStun:
Exhaust a unit. It doesn't ready on its owner's next turn. (Exhausted units can't attack or block). without some additional context. Note that some skills can appear as stand-alone on spells (e.g. LifestealLifesteal:
When this deals damage, you gain that much

., EchoEcho:
Get an additional copy when drawn.) while other cannot (e.g. AmbushAmbush:
Can be played to block an enemy attack or at the end of their turn., BerserkBerserk:
When this attacks, you may give it Reckless to attack a second time this turn. Can only be used once.

Reckless:
This must attack.).

Like all keywords, hovering over cards with skills will display a box explaining what they do.

Battle skills are skills that would have an effect if a Unit that has it is in play:

These other skills are not battle skills, as their effects are relevant while not in play:

Skills are defined in the Eternal Rulebook [1] as "bolded terms with no additional text." However, there are some cards which use different sets of skills for their effects.

Before Unleashed, there were only two cards that reference "skills" as opposed to "battle skills" - Divining Rod 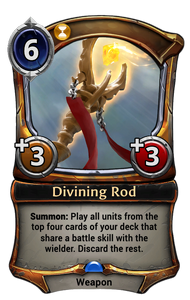 and Crown of Possibilities 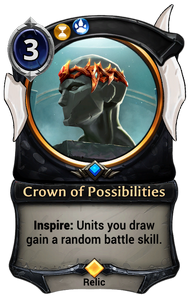 . Divining Rod referred to all of the skills listed on this page, while Crown of Possibilities would never give PledgePledge:
On your first turn, a card with Pledge can be played as a Sigil., VoidboundVoidbound:
This card can't leave the void., StealthStealth:
This unit is played hidden. It is revealed when it deals or takes damage, is affected by an enemy effect, or has anything played directly on it., or WarpWarp:
You can play this from the top of your deck..

With the May 4, 2022 Patch both of these cards were changed to only give battle skills. 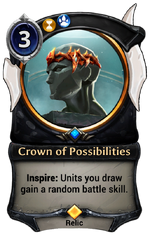 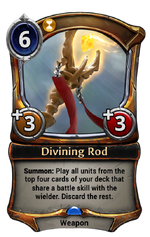 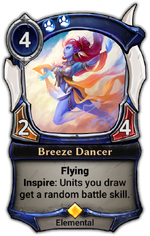