Squad Strategist is a unit card.

After being removed in the open beta transition, Squad Strategist was faction-shifted and re-released as Arcanum Monitor 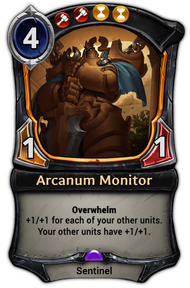 , a promo to The Empty Throne.

Retrieved from "https://eternalcardgame.fandom.com/wiki/Squad_Strategist?oldid=33905"
Community content is available under CC-BY-SA unless otherwise noted.