Deposing the tyrant who divided her people was just the beginning of Svetya's reign as Orene. [1]

After purchasing the Homecoming campaign, watching the final chapter, An Orene's Promise, unlocks a playset of Svetya, Merciful Orene.

Premium versions of Svetya, Merciful Orene also unlock if the premium campaign is purchased. Without it, the premium cards can be crafted for

9600 Shiftstone each, after being unlocked in the mission.

The premium version of Homecoming includes a Svetya premium avatar. 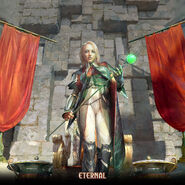 Retrieved from "https://eternalcardgame.fandom.com/wiki/Svetya,_Merciful_Orene?oldid=21049"
Community content is available under CC-BY-SA unless otherwise noted.