The mages of the Praxis Arcanum conduct mystical experiments into the nature of time… and how to bend it. [1]

Tesya, Omen Shaper is the fourth promotional card of Omens of the Past, after Colony Matron 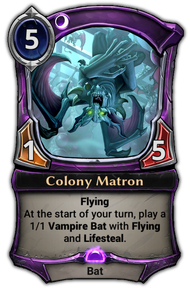 Retrieved from "https://eternalcardgame.fandom.com/wiki/Tesya,_Omen_Shaper?oldid=21265"
Community content is available under CC-BY-SA unless otherwise noted.