Eternal Card Game Wiki
Register
Don't have an account?
Sign In
Advertisement
in: Joshua Deni Prakoso, The Fall of Argenport, Rare,
and 4 more

The End is Near

The End is Near

Discard the top ten power cards of your deck.

The End is Near is a spell.

The following cards create tokens of The End is Near (or transform cards into it): 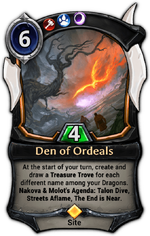 You can play this as the top-end to an aggro deck, to ensure you keep drawing non-power cards to keep playing against your opponent. 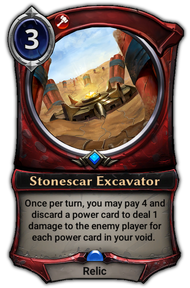 , another top end to aggro. You hold back some power to discard, and after playing both of these, you can hit your opponent for 11 or more damage.

The End is Near was revealed as a The Fall of Argenport spoiler.[1]