The Flame of Xulta is the seventh pack-based expansion set for Eternal Card Game. It was fully released on October 7, 2019 with 200+ new cards. A subset of its cards were released early in a special Draft Preview.

We will honor our Ancestors, and keep their laws, until at last the world grows dark.

Packs of The Flame of Xulta are available for purchase from the in-game store, and individual cards may be crafted with Shiftstone.

and other battle skills on one of your units.
DecimateDecimate:
When you play this, you can choose to lose one Maximum Power to gain the effect.
BargainBargain:
Can be played from your Market if you met its requirement this turn. Bargain cards can be in your deck and market at the same time.
InvokeInvoke:
Choose between a random spell, unit, and attachment of this card's factions to create and draw.

FateFate:
Does something when drawn.
Fate appears on the influence-fixing evangels cycle.
SpellcraftSpellcraft:
When played, you may also pay its Spellcraft cost to play the spell.
The Flame of Xulta brings back Spellcraft, last featured in The Fall of Argenport, to synergize with Muster. It also introduces relics and relic weapons with this keyword, which was previously limited to normal weapons.

The Flame of Xulta had many Unit Type Matters effects to support tribal synergies. The main supported unit types are also those represented in the Bargain cards, which are each triggered by a different unit type: Dragons, Cultists, Oni, Yeti, and Elves.

The set also introduced a number of new units types, including Gryffns, Qirin, and Mandrakes.

Kairos was immediately allowed in the Ranked and Expedition constructed formats, and its regular version became craftable.

On September 26, prior to The Flame of Xulta's full release, 81 commons and uncommons from the set were incorporated into Draft Packs in a special Draft Preview.[1] These cards were immediately playable in constructed formats, though the cards could only obtained through draft during the preview.

A preview event for The Flame of Xulta ran from October 3 until the set's release. It featured the set's five theme decks, highlighting new mechanics and strategies.[2] The event could be entered up to ten times, with each 10-game run costing 3,000 gold or 200 gems. Players used a different deck for their first five runs, then a random one for the remaining five. Runs rewarded packs of The Flame of Xulta.

Once the The Flame of Xulta, the theme decks from its preview event became available to purchase in the store for 3,000 gold or 200 gems each:

The theme decks are also available in a bundle for 1,700 gems. In addition to the five decks, the bundle also includes 4 copies of the alternate-art Ila & Mizo 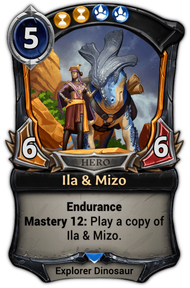 . Due to an error at launch the bundle cost 1,000 gems, which DWD honored and continued for a couple days as a discount.[3]

Nine in-game and platform achievements were added for The Flame of Xulta.