Tribute:
Cards with Tribute have an additional effect when played if a unit went to your void this turn. This includes units that die or units you discard from your hand and deck. 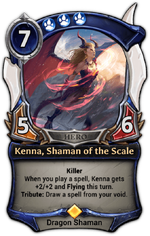 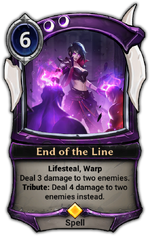 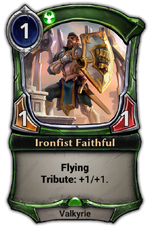 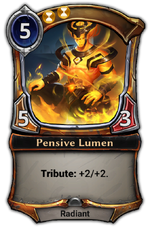 Find more cards with Tribute in its category page.

Tribute is a trigger keyword introduced in The Fall of Argenport. Like SparkSpark:
If the enemy player has taken damage this turn, this does something extra when played., it is related to SummonSummon:
Does something when played. but with an additional requirement to take effect. Like Spark, Tribute effects may appear on spells in addition to units and attachments.

Tribute was explained in its mechanic reveal announcement by Devon Rule:[1]

The Tribute keyword was first seen on the Set 4 spoiler reveal of Kenna, Shaman of the Scale, then described on the Eternal Discord Server.[2]. More details were later given in its mechanic reveal announcement.[1]

Retrieved from "https://eternalcardgame.fandom.com/wiki/Tribute?oldid=20433"
Community content is available under CC-BY-SA unless otherwise noted.