Eternal Card Game Wiki
Register
Don't have an account?
Sign In
Advertisement
in: Rayph Beisner, Flavor, The Tale of Horus Traver,
and 6 more

+1/+1 for each Stranger.
At the end of your turn, create and play a random Stranger.

The Tale of Horus Traver

Beat the relevant mission in The Tale of Horus Traver.

The following cards create tokens of Triumphant Stranger (or transform cards into it): 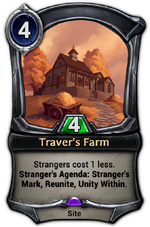 Play Other Equalivalent Card like Trimphant Stranger (example : Legendary) because enmy player will probably have

A Triumphant Stranger premium avatar was released with the Traver's Farm 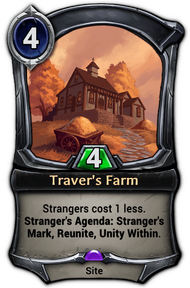 promotional card. It was available in the store for a limited time for 300

gems. A bundle with the avatar and a promo theme deck (including 4 premium copies of Traver's Farm) was also available, for 500