Play a relic weapon, a non-weapon relic, and a non-relic weapon from your void.

Unlock the Vault is a spell card.

Generally, it is best to have all three types of cards within your deck.

For a midrange strategy, you generally want to guarantee value, and while relic weapons readily go to the void, if you're not running self-mill or discard, it can be difficult to get a relic into the void. Some relics like Mistrust 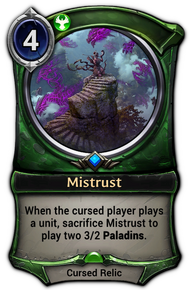 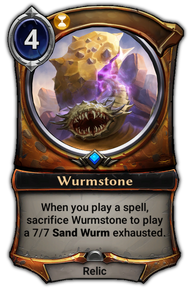 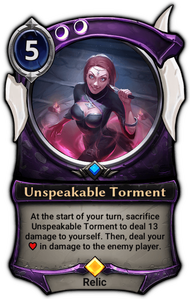 sacrifice themselves readily, and bring a good amount of value when brought back.

Weapons and Relic Weapons with SpellcraftSpellcraft:
When played, you may also pay its Spellcraft cost to play the spell. are valuable, as they offer a choice to get more value from them later in the game, or get a specific effect, such as with Ageworn Vestige 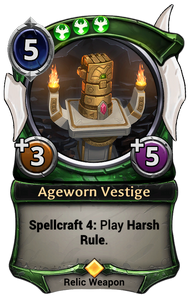 Retrieved from "https://eternalcardgame.fandom.com/wiki/Unlock_the_Vault?oldid=37811"
Community content is available under CC-BY-SA unless otherwise noted.