Vara is the favored heir to the Eternal Throne, but has grown tired of being a political pawn others use to their own ends.

Deadly
When you play a

unit (including Vara), play an additional

unit from your void and give it Voidbound.

This page is about one card for the character Vara. For other uses, see Vara (disambiguation).

Vara, Fate-Touched is a Hero Unit.

You get one indestructible copy of Vara for completing the tutorial. Additional copies may be opened in packs or crafted as normal.

Note: Vara's summon quote will change when other Scions are on the board, or when a player has the Eternal Throne totem:

Vara's original summon quote was "I'm not done with you yet!", but at some point on or before the release of Defiance this was changed to the above. 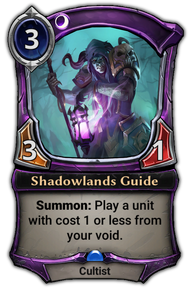 , or the tokens created by Azindel, Revealed 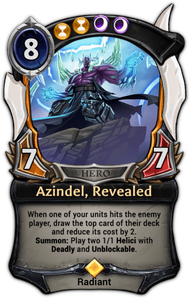 Playing Vara in a game helps you unlock the Battle for the Throne achievement for playing the 5 original Scions.

Retrieved from "https://eternalcardgame.fandom.com/wiki/Vara,_Fate-Touched?oldid=31236"
Community content is available under CC-BY-SA unless otherwise noted.